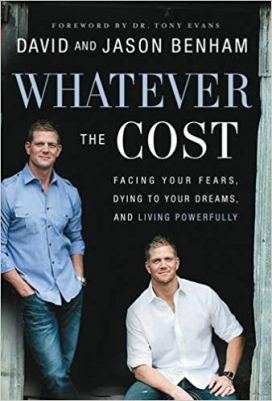 Whatever the Cost by David and Jason Benham
Age Range: 12 and up
Grade Level: 7 – 12
Pages: 240
Published by Thomas Nelson (June 28, 2016)
Genre: Non-fiction, Information, Biography
Buy on Amazon  Goodreads  Whatever the Cost

“David and Jason Benham are identical twins who grew up in East Texas. In the spring of 2014, the brother’s new show Flipping it Forward was canceled, right before it was about to launch, due to their consecutive views on abortion and traditional marriage. But even though David and Jason were forced to leave-what they thought was their future-the brothers say that they don’t care because they “refuse to remain silent about [their] faith]”. In their book Whatever the Cost, the brothers explain how to face your fears, dye to your dreams, and live powerfully. As Jason puts it, “When you hold your dreams with an open hand, God doesn’t have to pry your fingers loose when he takes them away.” David and Jason Benham are a great example to us in how we should live our lives, and stand up for our faith-Whatever the Cost.“

I enjoyed this book as it was easy-to-read and the brothers were constantly making jokes or fun of the other. The main lesson that I learned in this book was to face my fears and not be afraid to stand up for my faith or even just myself.